In addition to returning to classic black vinyl, the metalcore masterpiece (which includes singles “Ain’t Love Grand” and “Lip Gloss and Black”) will also be available in three collectible colorways. These include a “smokey clear” edition, exclusive to Revolver and limited to only 200 units, as well as a “clear-blue/black swirl” wax, limited to 500 units and exclusive to the Atreyu website. Additionally, fans can find a “sea glass clear” edition, limited to 500 units, exclusively on the Victory Records and Craft Recordings websites. All editions will be released on November 18 and are available for pre-order today. 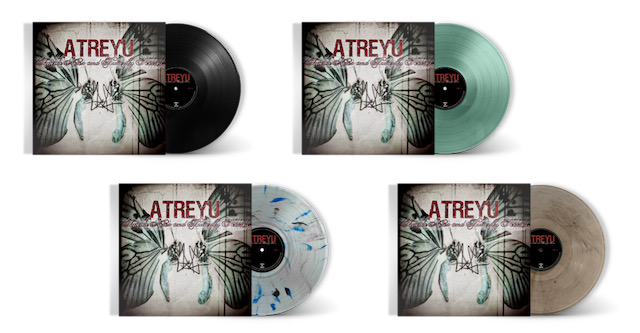 Named after the protagonist of Michael Ende’s The Neverending Story, Atreyu was formed in 1998. By the time they caught the attention of Victory Records in 2001, Atreyu had already released two EPs – the seven-track Visions in 1999 and the five-track Fractures in the Facade of Your Porcelain Beauty in early 2001. This final release would lay the groundwork for the metal band’s debut album, featuring early versions of the songs “Living Each Day Like You’re Already Dead”, ” Someone’s Standing on My Chest,” and “Tulips Are Better.”

After signing with Victory, the band entered the Trax East studio in New Jersey with producer Eric Rachel (The Starting Line, The Black Dahlia Murder) to lay down the tracks for their album. In addition to reinventing the three songs from Fractures in the Facade of Your Porcelain Beauty, Atreyu has penned a scorching collection of new material, deftly combining honest and thoughtful lyricism with the sounds of thrash, hardcore punk and new wave music. Swedish death. Metal.

Highlights include the relentless “Living Each Day Like You’re Already Dead”, the cathartic “At Least I Know I’m a Sinner”, and the melodic lead single, “Ain’t Love Grand”, which ruminates on the devastating pain of a breakup. “Lip Gloss and Black,” released as a follow-up single, showcases each of the band members’ prowess on their instruments – especially lead guitarist Dan Jacobs, who channels ’80s guitar heroes into his opening riffs, and vocalist Brandon Saller, who shines through his daredevil drumming and soaring, melodic vocals. The song – which features Atreyu’s trademark lyrics “Live, Love, Burn, Die” – was key to grabbing mainstream attention in five tracks, thanks in part to its sultry video, which aired loudly. rotation on MTV2’s Headbangers Ball and FuseTV’s Uranium.

Moving, explosive, dynamic and fearless, Suicide Notes And Butterfly Kisses was released in June 2002 and immediately captured the attention of the press. Fans were in complete agreement. Suicide Notes And Butterfly Kisses would go on to sell over 240,000 copies worldwide and, when reissued in 2004, hit the Top 40 on the Billboard Top Heatseekers and Top Independent Albums charts. Today, it is considered a defining album in the metalcore world.

Since then, Atreyu have grown into one of the biggest bands in the genre, with a staunch global fan base, thanks in part to two stints on Ozzfest, sold-out headlining tours, soundtrack appearances movies and games and performances alongside peers like Linkin Park, Avenged Sevenfold, Deftones, Slipknot and Bring Me the Horizon. To date, they have released a total of eight studio albums, including A Death-Grip on Yesterday (2006), which marked their first LP to break the Billboard 200 Top 10, and Lead Sails Paper Anchor (2007), which landed at No.8, and topped the US Hard Rock and Rock Albums charts.

The band, which currently consists of Saller (vocals), Jacobs (lead guitar), Travis Miguel (rhythm guitar), Porter McKnight (bass), and Kyle Rosa (drums), released their latest album, Baptize, in 2021. by John Feldmann (Blink-182, The Used, 5 Seconds of Summer), the album is a bold chapter in Atreyu’s story of endless determination and finds the band returning to the melodic flair of Suicide Notes And Butterfly Kisses. Looking ahead, fans can catch Atreyu this fall at the When We Were Young festival in Las Vegas, as the band embark on an extensive international tour beginning in February 2023.

Click on here to pre-order Suicide Notes And Butterfly Kisses on vinyl, or stream the album today. 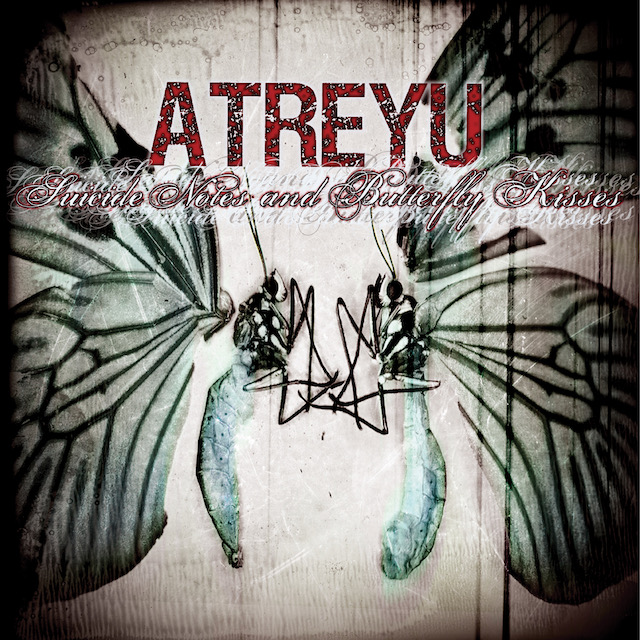 In front of:
“A Song for Optimists:
“Dilated”
“Love Ain’t Great”
“Live every day as if you were already dead”
“Deanne the Arsonist”


B-side:
“Someone is standing on my chest”
“At least I know I’m a sinner”
“Tulips are better”
“A Vampire’s Lament”
“Lip Gloss and Black”